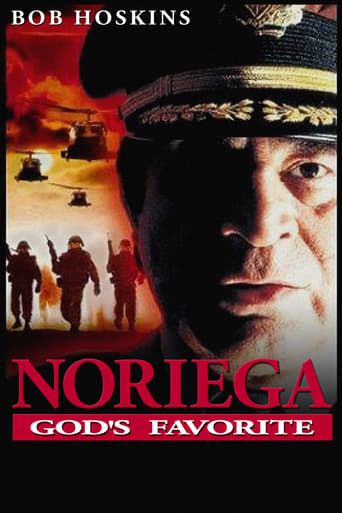 The story of Panamanian general Manuel Antonio 'Tony' Noriega, whose meteoric career, from utter poverty, as a soldier and CIA informant who also served as source to various other powers and even the Colombian drug mafia he claims to fight valiantly to please CIA director and later U.S. president Bush Sr., starts when he confesses to a priest, reminiscing how he has experienced such luck that he believes himself to be God's favorite- each time he takes more risks people tell him he went too far, but always seems to get away with it. In his marriage, he is constantly unfaithful to Felicidad 'Fela', notably with his mistress Vicky Amador. After public opinion, domestic and U.S., was scandalize by the brutal torture, rape and decapitation of generally respected Dr. Hugo Spadafora, he sees to it that the blame goes to President Nicky Barletta, only one year in office. When he feels forced to destroy a drug lab of the Medellin cartel he accepted payment from, even Fidel Castro tells him a Latino in power can offend anyone, even Washington to a point, but never the grimly serious Colombians. Next Noriega wants his military adviser Colonel Roberto Diaz-Herrera as the next stooge, but refuses him the ambassadorship in Japan -promised to a cousin of his mistress who teaches judo- so Roberto starts his own sect and talks about their sale of visas and favors to the Colombian drug lords. It gets worse when US Colonel Oliver North tells him Irangate has pulled the plug on the whole Nicaraguan Contra-program, and a Florida prosecutor is pressing charges against Noriega for his part in the drugs trades. After Noriega ordered Major Moises Giroldi to forge the presidential elections by force under the eyes of observer Jimmy Carter, and once in office plays the nationalist card to get the people behind him against Washington, Giroldi offers his services to the Yankee gringos, and mounts a military coup, but allows Noriega to gain time till the loyal Mountain Division turns up, and surrenders because the coup leaders's families are taken hostage by Noriega's police chief, only to be tortured and sodomized themselves. Finally Bush orders a U.S. military invasion: military resistance is impossible, so Noriega seeks sanctuary at the papal nunciature...